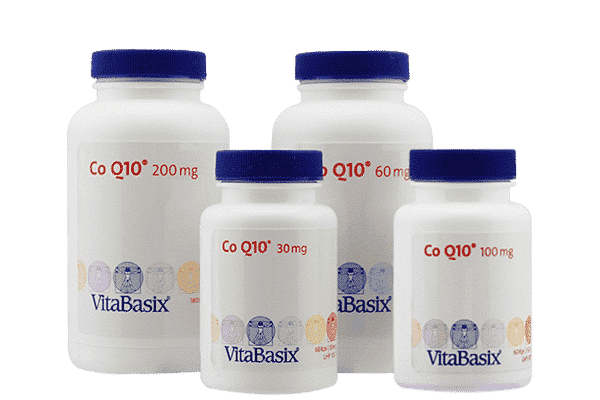 Is involved in many vital transformations in the cells and acts as a powerful trap for radicals so that it protects the cells against oxidative damage.

Coenzyme Q10 is also known under the name of ubiquinone. The name refers to the «ubiquitous» presence of this substance in the human organism and is thus indicative of its special importance for the cell metabolism. It is involved in many vital chemical transformation in the cells, among others in the formation of adenosine triphosphate (ATP), the energy store of the cells.

Coenzyme Q10 is formed in the liver but also ingested with food. It is mainly contained in beef, chicken, mutton, lamb, fish and eggs. In later age the organism no longer produces sufficient quantities of coenzyme Q10. In the course of time this causes a state of deficiency in the body which is responsible for cardiac diseases especially.

Although the reduced coenzyme Q10 content in the blood can be compensated by the intake of a specific diet, eating the necessary food such as beef muscle meat, beef hearts or eggs, is unfortunately also connected with an increased uptake of cholesterol and saturated fatty acids.

As an antioxidant, coenzyme Q10 has greater effects on a cellular level than the better known vitamin E and is the most important of all known coenzymes. It can be found in the cell membrane of the mitochondria where it is responsible for the formation of vital enzymes as well as of the energy storing ATP (adenosine triphosphate). All cells of the body, in particular the muscle cells, and especially the heart muscle with its continuous load, are dependent on a permanent fuel supply. The last important link in this release of energy is, in most cases, the splitting of energy-rich phosphate bonds such as in ATP. If the formation of ATP is disturbed, this can be observed in all cells because it impairs their natural functions. Muscle cells have the greatest need for energy and therefore they have the highest coenzyme Q10 content.

Numerous studies have dealt with the great number of positive effects of coenzyme Q10. To mention just a few examples, there is for instance the better physical exercise tolerance in sports people and also sick people (e. g. those suffering from anaemia).

Another important field of studies were diseases of the cardiovascular system. In this respect, the coenzyme was capable of improving both circulatory disturbances of the heart and cardiac insufficiency due to other reasons. It moreover allowed the heart to work more economically and, as a consequence, also lowered increased blood pressure, if any.

Positive effects were also registered with regard to the quality of sperm, and on various cells of the immune defense. Protection against free radicals, which are produced in greater amounts in the course of infections and inflammatory diseases and also when the body is exposed to contaminants, is another broad field of application, which could also include a slowing of the aging process. Positive effects on the fat and sugar metabolisms are also worth mentioning.

In normal cases depending on your age take with plenty of fluid as follows:

An ideal synergistic effect can be produced if the product is taken together with carnitine.