You are here:Home / Products / Oncochron® 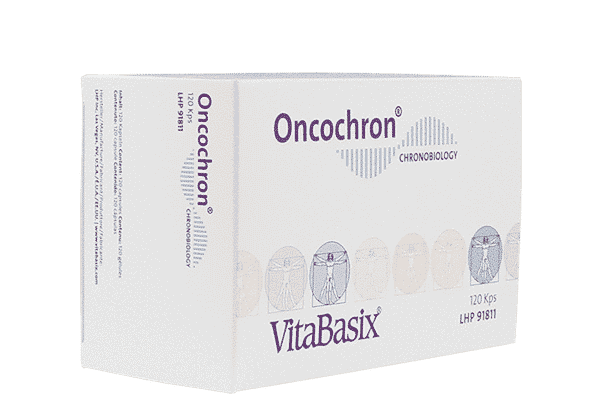 Chronobiological combination preparation made of scientifically proven phytochemicals with a cancer-preventive effect for suppressing abnormal cell functions outside the normal cell regulation patterns. For the prevention, reversion, or slowdown of cancer development.

The effects produced by active botanical substances influence the renewal and regeneration of human cells, and even enhance the protection against developing cancer. Their main function is to reduce the risks resulting from chronic inflammation and free oxygen radicals, which are considered to be the main causes of cancer development. In a much-noted report published in the reputed scientific journal «Nature» (Cancer Prevention with Dietary Phytochemicals), about a dozen of natural phytochemicals have been classified as cancer-protective agents. They serve as active ingredients in Oncochron®, a dietary supplement which is targeted at cancer prevention.

Modern cancer prevention strategies rest on several pillars. Their primary purpose is to reduce the number of cell-damaging events, so that repair measures are less often needed and the risk of undesirable cell growth is diminished. Another important aspect is that they influence natural biochemical processes in such a way that potential risks are reduced. This is, for example, achieved by certain substances during the inevitable conversion of hormones in the female breast. Moreover, the division of human cells is stimulated by certain growth factors. One of them is insulin. Practical measures of cancer prevention are enhanced by restoring an excessive insulin metabolism to normal levels. Another important mechanism in cancer development is the positive impact on the epigenetic code of the genetic material, which is the activation or deactivation of proteins and enzymes within the cell.

Certain plant constituents exert a positive influence on all these measures. Medical research has meanwhile identified them through epidemiological studies and investigations in molecular biology. It is therefore known at which point in the transition process from a healthy into an unhealthy cell which natural substance will be effective.

Chronic inflammation (silent inflammation) produces defense and renewal reactions inside the affected cells. While accelerating the rate of healing, they may also trigger uncontrolled cell growth and therefore lead to the development of cancer. Most of the substances combined in Oncochron® have strong anti-inflammatory properties, especially the antibacterial sulphur compound diallylsulphide, which is derived from garlic.

Extremely aggressive tumors like pancreatic cancer are resistant to conventional therapies, perhaps because they are furnished with a striking amount of tumor stem cells. They help the tumor to regenerate despite being attacked by medication and radiation therapies. Here is where sulforaphane glucosinolat, a substance contained in broccoli, exerts its astounding properties. It blocks the signaling pathways of the dangerous cancer cells, thereby making them vulnerable.

Carcinogenic substances require certain enzymes in order to cause cancer. The counterpart of such a metabolic action is the detoxification process, which rids the organism of illness-causing influences. The prevention of these enzyme reactions as well as the detoxification of cellular tissue are cancer-protective processes initiated by the isothiocyanates, which are contained in broccoli and most other cabbage family vegetables.

Our body organs produce exactly those active substances from the sexual hormones which they need at that moment. What pregnancy and oestrogen-dependent tumors have in common is a strong tendency to grow and form new blood vessels. The plant constituent indole-3-carbinol (contained in broccoli and all cabbage family plants) has the favorable property that it diverts hormonal conversion in postmenopausal women away from an increased breast cancer risk towards more moderate pathways.

A natural protective mechanism induces cells whose genetic material is irreparably damaged to kill themselves (apoptosis). Defective regulation, however, allows such cells to mutate and subsequently develop into cancer cells. The main substance contained in the Asian spice turmeric (curcuma longa), a relative of ginger, is curcumin. Curcumin disrupts such atypical cell cycles and prevents the formation of new blood vessels, thus causing the tumor to perish. Capsaicin, which is contained in hot peppers, exhibited the same effect in laboratory tests: prostate cancer cells were eliminated by 80 percent and tumors were found to shrink to one fifth of their size.

The body produces certain enzymes to eliminate toxins. This detoxifying effect is enhanced by gingerol and shogaol, two pungent phenols contained in ginger extract. They have also chemoprotective properties, similar to the cytotoxic agents applied in anti-cancer therapy.

Insulin acts as a growth factor for certain cancer cells, especially for those found in the bowels and in the breast. Catechins, which are contained in green tea, reduce the enzymes that contribute to high insulin levels in the blood. In this manner, the polyphenol plant constituents reduce the concentration of this hormone.

Cancer prevention based on natural substances also draws support from ecdysone, a special protein-forming steroid which, among other things, controls cell proliferation in molting animals (ecdysozoans). While reducing cell irritation, it positively affects the degradation of fat and the development of muscles by reducing abdominal fat.

Plants have genes just like we do. Any disruption of their activation and deactivation processes may promote the development of cancer. An affected cell produces certain proteins either in excessive quantity or not at all. As a result of another disruption, essential genetic information can no longer be read. Many phytochemicals interfere with these sophisticated control mechanisms and restore their normal function. One of the most active phytochemicals is resveratrol. This substance plays an essential role in anti-cancer treatment.

Chemoprevention is the use of substances for preventing, reversing, or slowing down cancer development. Epidemiological studies suggest that lycopene, a carotenoid which gives tomatoes their red color, produces a favorable effect on prostate cancer and stomach cancer and positively influences the hormonal receptors in the female breast. This phytochemical inhibits cancer growth, regulates the cell cycles, protects the genetic information, curbs the effect of insulin, and promotes anti-cancer enzymes.

Bees, in the thousands, use the phyto-mix propolis consisting of vitamins, amino acids, minerals, resins and bioflavonoids to protect their narrow living space against any type of germs and bacteria. Propolis inhibits the growth of tumor cells by inducing apoptosis (cell death).

Oncochron® was developed as a combination preparation in which each single ingredient as well as the combination of all ingredients together have a highly preventive effect. The chronobiological formula accounts for the fact that certain phytochemicals produce a better effect in the morning in cellular processes which are mainly active by day. Other constituents are directed towards regeneration and make more sense if taken at night.