You are here:Home / Products / Diabetichron® 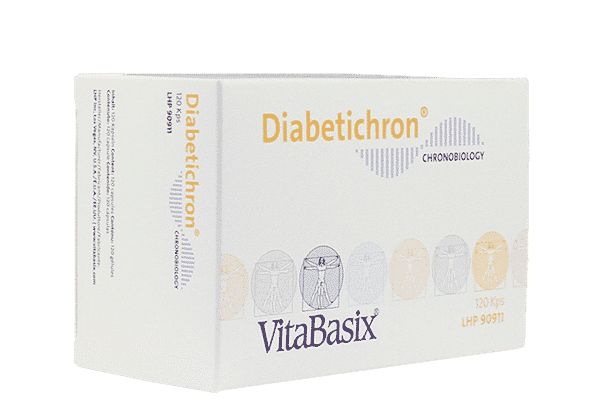 The innovative food supplement to regulate glucose metabolism for diabetics. The composition of various extracts, vitamins and minerals, adjusted to the respective time of day (day or night) allows largely physiological regulation of glucose metabolism. Maximum levels of the active substances are achieved by carefully selected and mutually harmonized constituents.

Besides heart attacks and diseases involving tumours, diabetes mellitus along with both of its occurring forms, type-I and type-II, is one of the most common pathologies of the civilised world. While type-I, with its outspoken insulin deficiency, is particularly found in young people, diabetes mellitus type-II is the most frequent form found in older patients.

Various factors such as being obese and an improper diet, along with genetic factors, result in individual cells of the body no longer reacting to the body’s own sugar level. Thus, the body is no longer capable of taking sugar from the blood and supplying its cells with this important nutrient. Furthermore, the resulting high blood sugar levels over the long term can lead to permanent damage to the vascular system and to the organs.

The balanced mixture of Diabetichron® can counteract this insulin resistance, thereby supporting the physiological regulation of the sugar metabolism in diabetics. Many severe long-term effects of diabetes caused by increased blood sugar levels including nerve damage, pain, blindness, heart diseases and advanced aging, can consequently be reduced or brought to a halt.

Furthermore, this formula, which was speciallydeveloped according to chronobiologic factors, does not only guarantee high levels of effectiveness, but also provides the required substances at the right time of day.

Diabetichron®, with its various components which have been harmonised according to respective daily requirements, has an effect on various points within the very complex scope of sugar metabolism. The individual effects can be schematically summarised as follows:

Banaba extract: Extracts such as those of the Banaba leaf facilitate a direct transfer of sugar from the bloodstream into cells. Due to the combination of the plant extracts of the bitter melon and Gymnema sylvestre, which already reduces the intake of sugar molecules from the intestines into the bloodstream, a reduced intake and improved utilisation of sugar is achieved in addition to a significant reduction of the blood sugar level.

Vanadium sulphate: Especially in the case of type-II diabetes mellitus, reduced sensitivity of the insulin receptors to the respective target cells play a particularly pathogenic role. Substances such as vanadium sulphate have been proven capable of sustainably increasing the functionality of these important docking sites for insulin. Furthermore, chromium, especially in its most biologically active form, chromium polynicotinate, causes the effect of insulin to be considerably higher as soon as it has been accumulated by specific receptors. Together, these substances facilitate a more efficient and physiologically-correct functionality of the insulin receptor.

L-carnitine: It is often the case with diabetics that sub-optimal utilization of blood sugar is accompanied by improper utilization of fat. Dietary supplements containing L-carnitine help to normalise the burning of fat. Furthermore, Enzymes such as lipases, proteases and amylases lead to improved digestion and utilisation of nutrients. This process is also supported, among other things, by certain extracts of fennel or other plants that are rich in bioflavonoids.

Alpha Lipoic Acid (ALA®): The blood sugar level of diabetics, which is continuously too high, results in, among other things, free radicals forming due to oxidative processes.

These auxiliary and degradation products of many metabolic processes are highly reactive and destroy unspecific cells and tissue structures. A sufficient anti-oxidative treatment is therefore crucial for an optimal dietary supplement for diabetics. One of the most well-known antioxidants is Alpha Lipoic Acid (ALA®), which is often referred to as a «universal anti-oxidant» since it regenerates vitamin C and coenzyme Q10, two other important antioxidants.

Bilberry extract: Bilberries contact pigments that are referred to as anthocyanins. These plant pigments have an anti-oxidative effect. Together with the remaining constituents, they help to ensure optimal blood supply to the eye, thereby improving the functionality of the retina and, independently of this, facilitating night vision. Bilberry extract can also be very helpful in the case of retinopathy, which is caused by mistreated diabetes and macular degeneration due to age.

Vitamins C, E and biotin: The mixture of antioxidants in Diabetichron® is rounded off by these substances, which are also known for their anti-oxidative effects. Biotin is also referred to as Vitamin B7. It supports metabolic processes and has a central role in the metabolism of fatty acids.

Magnesium: Numerous enzymes necessary for blood sugar metabolism only function well if a sufficient level of magnesium is available. Insulin resistance can be improved by the presence of magnesium; the available insulin facilitates a better flow of sugar into the cells.

Fenugreek: One of the most truly interesting of Europe’s medicinal plants, fenugreek (trigonella foenum-graecum) was discovered as a glucose absorption inhibitor. During the consumption of sugar, fenugreek inhibits the sudden rise of the blood sugar curve.