You are here:Home / Products / Chronoslim® 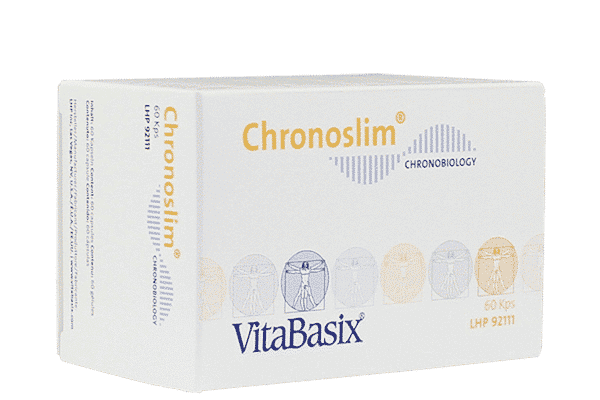 Given the difficulty in activating the body’s own physiological processes for weight loss by a change in behavior, ever more people are placing their hopes in the ability of scientifically tested plant substances to support this goal. While most attempts to lose weight with physical activity or by restricting one’s intake of food fail because of our human weakness, several well-known plant and fruit extracts with ingredients that influence the metabolism score well. They often have an adipolytic or fat-dissolving effect, regulate the glucose metabolism and control your feelings of hunger and satiety.

Nutritional experts are now focusing on 10 plants whose extracts co-determine what happens in our bodies to what we eat. Both the lipid and glucose metabolisms can be optimally adjusted. While taking into account the chronobiological rhythms of the organs, the innovative principle of Chrono­slim® developed on this basis strives to achieve several objectives: an increase in the general metabolism, fat burning with the concomitant reduction of fat deposit formation, the ideal glucose metabolism and appetite control – without a having to experience any stress or restricting one’s joy of life.

This is done by deliberately intervening in the work our organs do. Reduction of the fat deposits or the hindering of their formation can be achieved by activating, inhibiting and stimulating certain processes at the same time, but this often means an increased burden on the organism. On the other hand, thanks to the precise coordination of the different plant extracts in separate capsules for the day and night, it should be possible to obtain the desired metabolic activities without burdening the cardiovascular system or causing any hunger pangs.

Due to a sedentary lifestyle and an oversupply of food, millions of overweight people are trapped in a vicious circle. Every day, excess energy is converted into fat and is stored away forever. The ability of our fat cells to expand their volume many times over is a legacy of evolution. Additional stored fat can be a dangerous burden on the body in extreme cases. The so-called visceral fat, abdominal fat or gut fat acts like a huge amount of glandular tissue and secretes hormone-like substances. They are strongly linked to chronic inflammatory processes and eventually lead to metabolic syndrome, hypertension, diabetes and vascular disease.

If you want to regain a permanently slim figure under these difficult circumstances, you have to create a calorie deficit. Most people have practically already lost the battle right from the start. Simply bringing about a reduction in calories by refusing food or by increasing physical activity cannot be so easily integrated into a modern way of life. Chronoslim® relies on the stunning effects of selected natural substances and concentrates its innovative effect in accordance with the biological laws of our metabolism. This formulation is based on the fact that the body links all physiological processes to certain times of day – and these processes are repeated in a 24-hour rhythm. The micronutrients the body needs during the day should therefore be taken in the morning. Agonists for the nightly deposit of fat are on the agenda in the evening. The highest possible effect of the supplements is thus achieved by taking them at the best possible time.

Specifically, this means that the morning substances are aimed at boosting the metabolism, releasing energies that would make no sense at night. In contrast, however, while we sleep we need to discharge degradation products and, if possible, repair damage caused by metabolic stress, inflammation and oxidation tissue.

Chronoslim® therefore supports the desire for a reduction in weight by supporting a moderate reduction in food, to about 2,000 kilocalories a day, and moderate physical activity (3 x 45 minutes a week) in order to achieve the necessary calorie deficit.

Specific plant extracts manage to do what lifestyle changes often can’t: they break down fat molecules and initiate their combustion by speeding up the metabolism. As a side effect, they reduce body weight and allow the fat cells shrink to their original size. They also inhibit the renewed storage of unused energy – even when continuing to eat normally. The vicious circle is thus finally broken.

Chronoslim® helps to combat the chronic health disorder of being overweight, supported by the rhythms of chronobiology. Substances from nearly a dozen plants work together to achieve a positive weight balance. Some are more effective during the day, others are better at night, and others interact with each other around the clock.

For centuries, the West African plant Irvingia gabonensis was the main component of the diet of characteristically slender tribes in Cameroon and Nigeria. Under the name of African mango it caused a great stir internationally. Substances in its seed reduce body fat, improve blood lipid levels, normalize elevated blood glucose levels and increase the release of leptin, our primary appetite-suppressing body substance.

After ingestion, the bitter orange with the botanical name Citrus aurantium initiates an increased flow of blood in the capillaries: with its natural beta agonists, it stimulates blood flow in the blood vessels and is well tolerated, thus causing an increase in the basal metabolic rate and fat burning. These active molecules belong to the group of synephrines. Its high level of tolerance is explained by the fact that the body can produce this substance from amino acids itself – but only in tiny amounts.

The procyanidins, flavonoids and amines in hawthorn improve blood flow with reduced blood pressure. These cardioprotective properties help to ensure that the thermogenesis promoted by the plant substances in Chronoslim® does not burden the circulation.

In a way that is still mysterious today, a high dose of vitamin C is linked to a reduced body mass index, while, conversely, people with this deficiency have a particularly hard time of getting rid of fatty tissue.

Green tea is not only the healthiest drink in the world because of its antioxidants, but thanks to its natural caffeine it is also an extremely well-tolerated fat burner.

The leaves of the Ginkgo biloba contain two substances – ginkgolides and glycosides – that have the ability to increase blood flow to the brain and through the fine micro-capillaries. This improves the metabolism and calorie consumption – and at the same time it reduces nervousness, which often leads to food cravings.

The trace element of chromium (from chromium polynicotinate) improves insulin action and thus the blood glucose metabolism. In addition, it reduces adipose tissue and builds up muscle mass. Tannins, fats and oils in the Ayurvedic plant Centella asiatica are detoxifying and anti-inflammatory. They promote the removal of unwanted degradation products of metabolism.

Further helpers on the weight front: the enzyme papain in papaya, the catechols in the leaves of the Java Tea – also called Cat’s Whiskers – and the digestive enzyme bromelain with the ability to split different molecules and to thus stimulate the body’s metabolism.