You are here:Home / Products / Akne-Plex® 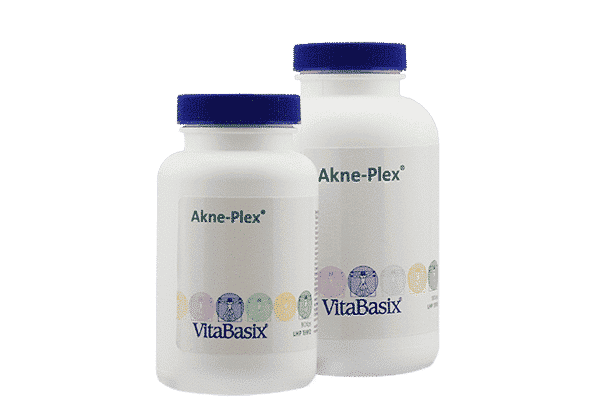 Contains a well-balanced combination of nutrients, vitamins, enzymes and trace elements. It has an effect that is immuno­modulating, antiinflammatory, skin-purifying, and regulating the cell proliferation of the skin epithelium.

Acne is a skin disease characterized by reddened, inflammatory pustules which are mainly found on the face, neck and shoulders. It is typical of acne to first develop in the teenage stage and to continue into early adulthood.

The hormonal change occurring during puberty is considered one of the factors causing acne to develop, it being mainly the androgens (male sexual hormones) which stimulate the production of sebum and keratogenesis. Based on this, often bacterial infections of the sebaceous glands occur.

An iodine intake that is too high or a poisoning with chloroorganic chemicals may also lead to changes in the skin that are similar to acne. In practice, however, acne is very rarely attributable to either of these.

Sometimes a change of the nutrition proves to be helpful, but the kind of food that is not well-tolerated or makes the inflammation worse varies from person to person. Controlled studies showed how difficult and error-prone such search for causes is.

Akne-Plex® contains vitamins, trace elements and natural antiinflammatory and modulating substances. The effect of vitamins against acne and related inflammations is well documented in clinical studies. The other ingredients are traditionally used, for instance, in folk medicine or homeopathy to treat inflammatory skin diseases.

Several studies showed that zinc has a positive effect on acne. One study even found that under zinc effects were produced that were comparable to an antibiotic therapy.

High doses of vitamin A are successfully used to clinically treat severe forms of acne. Since, however, extremely high doses (several 100,000 units a day) are necessary to this end, which may have serious side effects, such a therapy can only be carried out under strict control by a doctor. The effect of a lower-dosed vitamin-A substitution is, however, also documented.

Positive effects were also found in a treatment with panthotenic acid, niacin and vitamin B6.

Proteolytic enzymes – as they are found in the plant preparation bromelain – have an antiinflammatory effect as they assist in the degradation of proteins, which play a role in the inflammatory process.

The roots of arctium lappa (big burdock) are used in the (asian) folk medicine for purification of the blood. The active ingredients isolated were inulin and mucins.

The extract of the thymus gland contains immunostimulating and modulating active ingredients.

Various trace elements whose (rather rare) deficiency may also entail skin problems round off the formulation.

In normal cases take 2 capsules daily at breakfast with plenty of fluid.