You are here:Home / Products / Phosphatidyl Serine 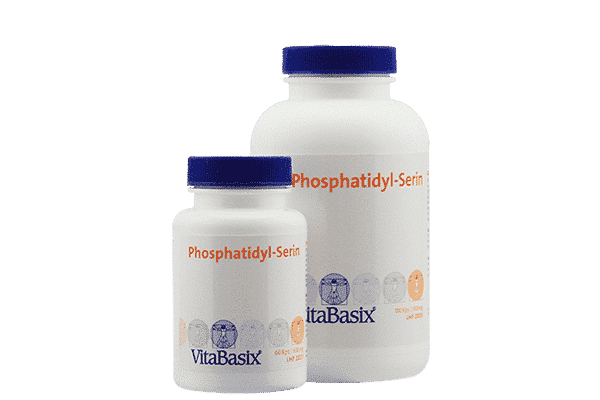 Phosphatidyl serine is an important substance for the transmission of impulses of brain cells. Its deficiency has a negative effect on memory functions and on the ability to concentrate and may manifest itself from age 45 onwards.

Phosphatidyl serine belongs to the phospholipids which serve quasi as an «anchor» for proteins in the cell membranes. Such protein molecules fulfill various important tasks as receptors, enzymes or to selectively transport substances through the membrane.

Phosphatidyl serine is an essential building substance of the cell membranes and plays an important role in particular in the transmission of impulses between the nerve cells. Its relative deficiency in old age is a frequent cause for a slowed-down capacity to think, reduced memory and depressive mood. Phosphatidyl serine substitution may therefore frequently eliminate these symptoms or at least relieve them.

The saying that «those who are idle stagnate» also applies to the brain, or course, and exercises to train the memory as well as active participation in social life instead of withdrawal and indifference are decisive life style factors which help to maintain the brain performance also in old age. Furthermore, the known neurotoxins, primarily cigarette smoke and excessive alcohol consumption, should be avoided.

Young people are capable of synthesizing themselves sufficient quantities of this important building substance phosphatidyl serine, which is contained in food in traces only. With advancing age this ability decreases so that starting around the age of 45 the risk of a phosphatidyl serine deficiency increases. Together with a sensible and active way of life the regular substitution of phosphatidyl serine from age 45 onwards is therefore also rightly considered to be an appropriate prevention measure for a mentally fulfilled old age.

Phosphatidyl serine occurs in great quantities mainly in the white substance of the brain, which largely consists of cell membranes of the supporting cells that serve the insulation of the nerve fibers. But it also plays an important role in the membrane of the nerve cells themselves. Only an optimal consistency of the membranes makes an undisturbed transmission of impulses between the individual cells possible.

Because of its key role in the transmission of impulses in the brain it is not surprising that a phosphatidyl serine deficiency leads to an impairment of the brain function, which may manifest itself in the form of a decreased capacity to think, a reduced memory and also depressive moods. Thus, particularly in case of the so-called «involutional depression», a disease of advanced age characterized by depression and cognitive degeneration, the administration of phosphatidyl serine has proven to be an impressive success.

Numerous studies also investigated the effect of phosphatidyl serine in Alzheimer’s disease. Alzheimer’s disease proper is a specific form of dementia. In these patients the cognitive impairments progress particularly fast and drastically. With progressing disease more and more brain cells die, the neuronal networks lose more and more capacities so that the symptoms worsen dramatically.

As a consequence, patients suffering from a progressed stage of Alzheimer’s disease may often have only 20 percent of their nerve paths left. Thus not only the capacity to think worsens, but this may also lead to a massive personality change entailing reduced emotional control. One of the first double-blind investigations with phosphatidyl serine was carried out in 35 hospitalized men and women aged between 65 and 91 years. All these patients had a reduced memory and decreased capacity to think that is characteristic of Alzheimer’s disease.

The patients were examined at the beginning of the study, after 1 week and after 6 weeks as well as 3 weeks after the end of the treatment phase. Using the so-called «Crichton Rating Scale», a standardized scale, orientation, communication, cooperation, agitation, mobility and mood were recorded, as well as continence, dressing, nutritional and sleeping patterns. The examinations showed that when phosphatidyl serine was taken all investigated parameters clearly improved.

It seems to be obvious that this complex pathologic process whose exact causes are still not fully established cannot be cured by the administration of a single cell membrane building substance. Still the administration of phosphatidyl serine to Alzheimer patients showed significant improvements in the brain performance, particularly at an early stage of the disease. This underlines the importance of phosphatidyl serine and the fact that its deficiency plays a role even in diseases that are so frequent and clearly circumscribed as Alzheimer’s disease.

In normal cases take 1 capsule a day (with your breakfast) with plenty of fluid.