You are here:Home / Products / Phenylalanine-DLPA® 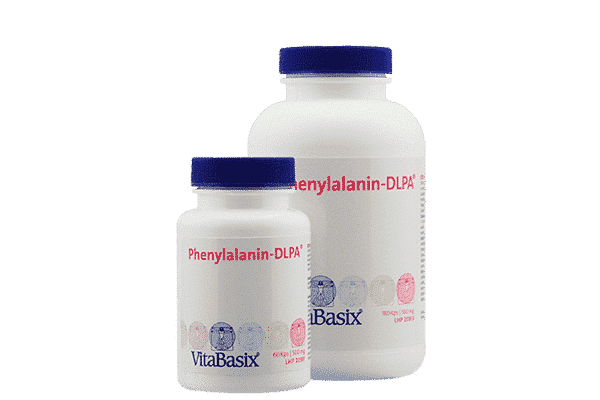 Amino acid against pain and depression. The intake of DL-phenylalanine (DLPA®) in addition to your daily food is effective and safe in certain indications.

The feeling of sadness and depressive mood can lead people to the abyss of their lives. In psychiatry, depression is a severe disease which in many cases requires the permanent intake of medicines and psychotherapeutic treatment. If a clinically relevant depressive disease is not diagnosed and treated correctly and in time, it may sometimes be too late for those concerned.

Thanks to the progress made in science, modern medicine has now succeeded in shedding some light into the molecular darkness behind depressive diseases. Recent studies have shown, for instance, that there is a close connection in the human body between depression and certain biochemical messenger substances («neurotransmitters»). In particular, depression largely depends on the catecholamine level in the body.

Apart from their functions for the heart, circulation, and blood pressure, noradrenalin and dopamine also play an important role in the transmission of impulses between neurons. This is the reason why these catecholamines are also called «neurotransmitters».

Most of all a finely tuned balance between the catecholamines in the brain is extremely important. In case of disturbances in the metabolism of these neurotransmitters, severe diseases may be the consequence. In this respect, depression is only one disturbance which can be traced back to a neurotransmitter imbalance. Because also in case of the frequent Parkinson’s disease one can find a disturbed balance of the neurotransmitter dopamine.

Normally, catecholamines are formed in the body by molecules that are ingested with the daily food. For many people, however, the usual food as a source for catecholamine-building substances is not sufficient. These people are different from others in that there are small biochemical differences in their metabolisms.

Actually, these people are quasi «biochemical time bombs» because their neurotransmitter balance can be upset at any time. These biochemical differences seem to be responsible for the fact that such people develop a depressive disease in the course of their lives.

The solution of the problem of insufficient intake of neurotransmitter-building substances with the daily food is the additional intake of specifically developed supplements. The most important parent substance of the catecholamines is the amino acid phenylalanine.

When producing L-phenylalanine synthetically in the laboratory, one usually gets a mix, one half of which consists of the levorotatory and the other half of the dextrorotatory form of the amino acid.

The mix of D- and L-phenylalanine is called DLPA® and is successfully used to treat depression nowadays.

L-phenylalanine mainly serves as a building substance for the most important neurotransmitters in the brain, where a well-balanced ratio of catecholamines can prevent the occurrence of depression.

D-phenylalanine, on the other hand, also has many favorable effects. The dextrorotatory form of the amino acids has proven to be effective in the treatment of Parkinson’s disease. In addition, D-phenylalanine was also to some extent successfully used in the therapy of chronic painful diseases (e. g. rheumatism and arthroses). Finally, D-phenylalanine can also counteract the emergence of depressive symptoms due to its conversion to phenylethylamine.

In view of an optimal dosage of DLPA®, usually 75 – 1500 mg per day are prescribed, depending on the disease. Since the mix of active ingredients called DLPA® has very strong effects on the nervous system, mood and emotional state, DLPA® should be used exclusively as prescribed and supervised by a doctor.

In normal cases take 1 – 3 capsules a day with plenty of fluid.