You are here:Home / Products / Imperial Green® 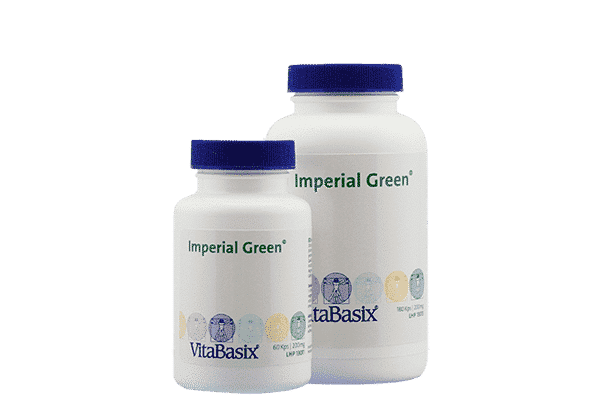 The healing power of green tea has been known for millennia and can be used in vascular diseases, lipometabolic disturbances and other chronic diseases.

Due to stress and environmental toxins we are constantly under the influence of free radicals – oxygen molecules which have either one electron too many or lack one electron. They are generated by cigarette smoke, X-rays, UV rays of the sun, by nitrite residues in food, etc. Stress has a reinforcing effect on their generation since permanent stress reduces the body’s ability to defend itself.

Free radicals lead to oxidation processes which aggressively attack the cells. They accelerate tissue degeneration and therefore also the aging processes. They moreover seem to be responsible for a faster course of certain diseases such as asthma, atherosclerosis, cancer, diabetes, Alzheimer’s disease and a number of inflammatory processes. Nature, however, provides us with a number of protective substances – the antioxidants. Among them are the vitamins C and E, beta carotene and catechins.

Catechins are the active substances of green tea which, due to the fact that they are extremely potent, protect against heart and vascular diseases as well as against infections with viruses and bacteria. They could also be effective in cancer-related diseases, as is suggested by first studies.

Chinese doctors have known the positive properties of green tea for many centuries, and they use them. With the help of the pure green tea extract as it is contained in Imperial Green®, the effect can be used to its maximum extent and everyone may profit therefrom easily and effectively.

Green tea contains volatile oils, vitamins, minerals and caffeine as well as great quantities of active substances which are the secret of its positive effect. Green tea contains catechins, substances belonging to the group of polyphenols. Catechins are synthesized by many plants, among others grapes, cranberries, blueberries, maple and pines, red-flowered hawthorn and legumes. But also parsley and peanut shells contain catechins. In the case of green tea it is mainly epigallocatechin that is regarded as responsible for the positive effects.

Investigations have shown that the catechin of green tea not only has a similar effect as the vitamins C and E but that it probably is the true, natural substance that increases the effect of these vitamins. It is, however, undisputed that the extract is one of the most powerful antioxidants and most efficient radical catchers that exist.

In normal cases take 1 – 3 capsules daily in the morning with breakfast with plenty of fluid.