You are here:Home / Products / Coffain® 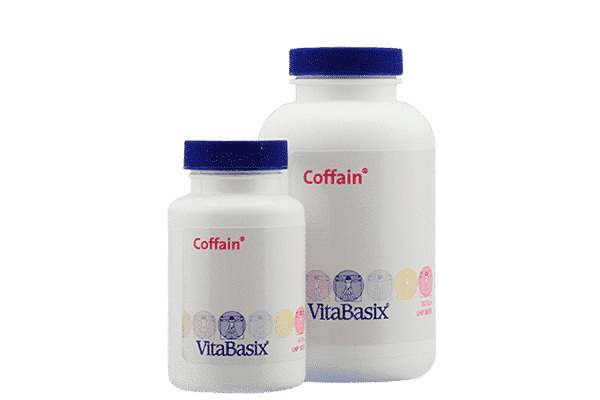 Invigorates body and mind with scientifically tested substances. Extends the release of energy over several hours. Ideal stimulant in the morning and during the day whenever a higher level of performance is required.

It is not without reason that the espresso or the cappuccino have become so popular: the biologically active substance caffeine is an extraordinary physical and mental stimulant. A sensational study among cyclists showed already decades ago that they had a seven percent lead in a 2-hour distance after having consumed coffee. On a circuit, coffee drinkers increased their endurance by 29 percent. Cross-country skiers even reached a 44 percent increase as compared with athletes not stimulated by caffeine. Does that amaze you? From a scientific point of view this is no mystery at all. For situations requiring an enormous amount of energy, our brain provides a substance called adenosine. But this is only done if so ordered by the brain. The similarity of the caffeine molecule to adenosine is so great that it can provoke the same effect, and this quite automatically as soon as we want it, with the first gulp of coffee. While the caffeine molecule connects to the surface of certain cells, certain vessels dilate. The oxygen supply increases. Greater amounts of the excitatory hormone adrenaline are released. This triggers a performance high, our nerve system is activated, the heart beats faster, the blood supply of the muscles increases (while that of the skin decreases). Energy reserves in the form of sugar and fats are released. Information cascades activate most of the organs and extend this condition over several hours.

A cup of invigorating coffee is not always at hand. In such a case, stimulation in the form of a capsule offers itself.

Coffain® is an invigorating combination of active ingredients to release natural energy potentials. Concentrated in a single capsule are carefully balanced and coordinated activating components. These are biologically active important substances that have the function of stimulants. They stimulate the central nervous system. Coffain® contains caffeine, produced in the highest active quality from the guarana berry and the cola nut. The chemically identical substance obtained from the coffee bean is the most common psychoactive agent worldwide. The guarana extract used in Coffain® is produced from the seeds of a red fruit from the Brazilian rain forests. With the ancient Indian tribes of South America it already played a mystic role as a stimulant. The current results of clinical research confirm that caffeine provides both a recovering and a medically restoring mental vigilance. The substance accelerates the train of thought, increases concentration and improves physical coordination. It reduces feelings of fatigue. Caffeine reaches the blood stream within 45 minutes and has a physiologic half-life effect of up to six hours. In Coffain® it is supple­mented by a well-balanced mix of further active substances which takes into consideration in the best possible manner our current knowledge about the metabolic activity of natural stimulants. Therefore, Coffain® also contains taurine (in English bull), an active ingredient contained in many well-known energy drinks. The ideal combination of the active substances minimizes side effects and increases the efficiency level. The substances do not obstruct each other therapeutically and develop their greatest effect at the right moment.

Taurine: («Bull’s gall»), an amino acid complex which increases the effects of many substances. Its own effect is that of a neuro­transmitter in that it transmits nerve stimuli.

Niacin: Also known as vitamin B3, it is vasodilating, stimulates the blood flow and is important for supplying the brain with oxygen.

Vitamin B6: Facilitates the production of brain messenger substances such as serotonine (the natural «happiness hormone» of mankind).

Guarana extract: The traditional stimulant from the Amazon jungle is known for its long-lasting effect.

Kola nut extract: Fast-action semi-luxury product and stimulant that is a ritual aphro­disiac in Africa.

Caffeine is a plant extract from the coffee bean and enhances the energy consumption of the organism.

NADH is a substance related to vitamin B3, which is present in all cells and is involved in redox processes. Thus, its most important function is to regulate the energy balance in cells. Reduced levels of this substance were shown to be associated with loss of memory and degenerative symptoms of the brain.

In normal cases take 1 capsule daily in the morning and when needed with plenty of fluid.