You are here:Home / Products / Acetyl-L-Carnitine 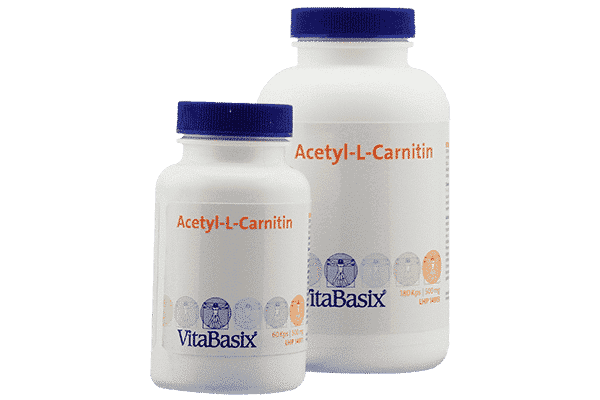 The ester acetyl-L-carnitine not only has biochemical similarities with the amino acid carnitine but also similar metabolic functions, especially in the transformation of food to energy. As a food supplement, acetyl-L-carnitine is effective in various forms of dementia as well as in peripheral neuropathies.

Acetyl-L-carnitine is an ester of the amino acid L-carnitine, which can be synthesized by the body from lysine and methionine. Acetyl-L-carnitine itself is formed by a transferase enzyme in the liver, the kidneys and the brain of humans. Regarding the biologic effects,
acetyl-L-carnitine increases the uptake of acetyl-CoA in the mitochondria – the «power plants» of the cell – by way of fatty acid oxidation. In addition, the production of acetylcholine is stimulated and the synthesis of proteins and elements of the cell membrane supported.

Due to these basal biochemical effects, L‑carnitine and its ester act more or less as a fuel for the energy provision in the cells. A deficiency in these important substances can therefore be felt in all body cells, and tissue subjected to great stress (muscles, myocardium, brain, etc.) is, in principle, much more prone to disturbances because it has a higher energy requirement.

In its natural occurrence, acetyl-L-carnitine is mainly found in the brain, but also in other tissues. The substance is, moreover, available as a food supplement. Although, in the strict sense, no states of deficiency with regard to acetyl-L-carnitine should exist as the body itself synthesizes the ester, the levels of acetyl-L-carnitine in tissue go down with aging. According to medical studies, the amino acid can be used successfully for various forms of dementia
(e. g. Alzheimer’s disease), age-related depression, HIV infections, diabetic neuropathy, cerebral circulatory disturbances as well as alcohol-induced cognitive deficits.

The exact modes of action of acetyl-L-carnitine are not yet fully elucidated. According to recent studies the ester acts as a parasympathomimetic due to its structural mutualities with acetylcholine. In this sense, acetyl-L-carnitine acts as a cholinergic neurotransmitter and as such seems to stimulate the neuronal metabolism in the mitochondria.

Groups of researchers attributed this cholinergic effects of acetyl-L-carnitine to a blocking of postsynaptic inhibition potentials. Other authors found that these effects are caused by a direct stimulation of the synapses. Of much greater importance, however, seems to be the fact that acetyl-L-carnitine can stabilize the fluidity of the cell membrane by regulating the endogenous sphingomyelin levels, which is probably due to an increased cellular energy metabolism in the mitochondria.

In addition, acetyl-L-carnitine also acts as a substrate reservoir for the cellular energy production. This could be decisive for the fact that sufficient intracellular levels of
acetyl-L-carnitine can prevent the excessive dying of nerve cells. It could also be proven that
acetyl-L-carnitine seems to enhance the effectiveness of certain nerval growth factors in individual brain areas.

In normal cases take 1 – 2 capsules 3 times a day at mealtimes with plenty of fluid.